The most complete tour of crypts and underground Rome

Guided tour of crypts and underground rooms of the archaeological complex of the Basilica of San Clemente and the Roman houses of Celian Hill.

Walking along the streets of Rome you will have happened to think what ever this ancient city can hide in its undergrounds or how many more traces of Rome’s glorious past can still be found under our feet.
With this tour by Storiaviva you will discover this amazing underground world under the modern streets. It will make you really understand the richness of Rome in archaeological treasures and that the great monuments that we admire in Rome’s squares are just the most evident traces of a marvellous world and much more is still buried under the modern city. . . It will then be an exciting walk in the history of Rome.

PART 1 – Guided tour of crypts and underground rooms of San Clemente: a journey 12 meters down into the history of Rome. 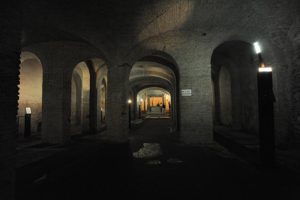 The tour of underground Rome will begin with a guided tour of the Basilica of San Clemente, a special place where you can relive the long history of Rome.
The Basilica of San Clemente is an archaeological complex on three levels that we will discover as if we were leafing through a history book. Proceeding from the highest to the lowest layers we will experience the thousand-year history of this site from the present day to the Roman era. .
The first level of the complex of San Clemente is the current basilica, built in 1100 and considered one of the most important examples of medieval churches in Rome.
It will be surprising to see how the Basilica, despite the necessary modernization and restoration work that has taken place in recent times, has preserved the original appearance and with it those feelings that we would have felt at the time. Inside we will admire some of the works of art that made the Basilica famous, preserved in a splendid state of preservation and considered among the masterpieces of medieval art.
The famous apse mosaic with the tree of life is one of the finest medieval mosaics in Rome. The church still shows the old floor beautifully decorated with the use of colored marble inlays arranged to form geometric patterns of various kinds. The scola cantorum is one of the rare examples still visible of this liturgical furniture in the medieval churches of Rome.
The guided tour of the Basilica of San Clemente will then continue in its underground levels. The first level of the tour through the undergrounds is a suggestive walk among the remains of the Lower Basilica built in 399 and used until about 1100 when it was abandoned and rebuild .
Thanks to the excavation work of the lower basilica, valuable frescoes from the 9th and 11th centuries emerged, which can still be admired today. In particular, the stories of the titular saint of the basilica, Clement, with his miraculous deeds.
It is a rare artistic testimony of medieval Rome made even more interesting by a surprising detail that could escape without the help of a guide: we will rediscover the origins of the Italian language by deciphering the oldest “comics” currently known. You will see the dialogue between the various characters of the scene relating to the miracle of Sisinnio, depicted as a real comic, written in the vernacular and with a slightly colorful language.

Part 2 Roman Houses of Caelian. Roman houses under the basilica of St. John and Paul. From pagan City to Christian Rome between art and archaeology. 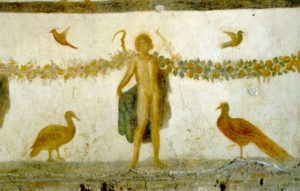 The guided tour of underground Rome continues through the Celian Hill with its characteristic and evocative medieval aspect to reach the basilica of Saints John and Paul. The basement of the basilica in this house also reveal hidden treasures of exceptional importance; we will discover the rooms of a Roman domus decorated with valuable frescoes that show the artistic taste of Rome in the third century.
Finally, we will arrive at the small antique museum where the finds found in the excavations and illustrating the attendance of the site from Roman times to the Middle Ages are exhibited. An opportunity to learn about details of everyday life: the pottery used on the tables, the amphorae for transport, the lighting of the houses and the trademarks that were used on the bricks of the time.